So if any of you follow my blog you will have already known that I recently went on a road trip to Nashville, Tennessee! It has always been a dream of mine to go there because I really love country music and just the ENVIRONMENT that comes along with it! 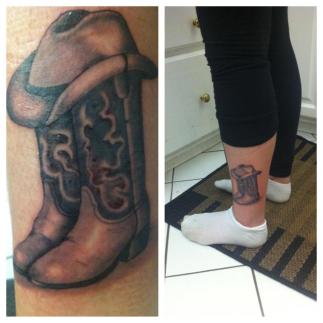 * Fun fact about me- I actually have cowboy boots tattooed on me! Thats how big of a fan I am of country music!

Anyways back on track,

Going to Nashville has always been a dream of mine so Steve and I along with 4 of our friends decided to take a week off and road trip to Tennessee! We rented a house just outside of the downtown area in East Nashville which was perfect because it had a HUGE backyard and enough bedrooms for all of us! It was so unbelievably hot while we were in town so it was nice to just relax in the backyard with some drinks during the day if we didn’t feel up to going into town! We used www.airbnb.com to find the house, and I highly recommend using this website wherever you might be going somewhere as an alternative to a hotel! People who want to rent out their houses put them on this website and you are able to contact them directly and arrange to stay at their house! It is much cheaper than a hotel room and you have your own space which is definitely really nice. If you are planning a trip to Nashville I highly recommend staying where we stayed! The owner of the house, Brian, was extremely accommodating and was able to help us with any questions we had about the house or Nashville in general! (please contact me if you would like more info on the house.)

Instead of going through my trip in detail day by day, I think it would be easier to just tell you guys the top five things we did! This way if you are ever planning on going to Nashville you have an idea of what to do!

The Honky Tonk Highway is definitely the place to be in Nashville. It is the main strip right downtown filled with shops, 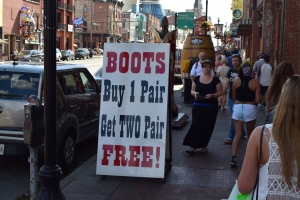 restaurants and TONS of bars. Every bar on the strip has live country music all day and all night. The nightlife here is incredible! Some of the top bars on Broadway are The Stage, Tootsies, Tequila Cowboy and Honky Tonks. My favourite one out of those is definitely Honky Tonks. It’s 3 floors and on every floor is a different band playing! It gets SO packed at nighttime and everyone is so full of life and just enjoying the music! Another thing you’ll find on Broadway is the ENDLESS amount of cowboy boot stores and all of the deals. Most stores have ‘Buy 1 pair, get 2 free!’ Which is AWESOME if you and a couple of your friends are planning to buy some cowboy boots. A couple of the other stores have 20%-50% off of boots if you are just wanting to get just one pair!

People from every walk of life end up on Honky Tonk Highway, it is definitely the place to go to ‘people watch’. A couple of times throughout the trip we saw a man in a technicolor robe, walking a goat with a tie die shirt on. It was definitely entertaining until the goat head butted Steve in the shin! I have to say, I laughed pretty hard when it happened until he complained about his knee hurting the rest of the trip. Poor Steve!

If your going to go to Nashville, I highly recommend taking a day to travel to Lynchburg, Tennessee to the Jack Daniels Distillery. It’s about an hour and a half from downtown Nashville, but it is definitely worth the drive. Not only do you get to see the only Jack Daniels distillery in the world, but the town of Lynchburg is so cute and quant with tons of things to do! We went to the distillery for 12:00pm and our tour didn’t start until 2:00 but I’m so glad we got there two hours early because we were able to explore the town of Lynchburg. We went out for lunch to a restaurant called Barrel House BBQ that had the BEST BBQ food I have EVER tasted. Steve even went back after the Jack Daniels Distillery tour to get some more ribs just because he loved them so much! The atmosphere of the restaurant is really cool too. The owner comes by to introduce himself and tell you a little bit about the place and you can also write your signatures on the walls of the restaurant! Also, the price is EXTREMELY reasonable. I got a sausage dog and I believe it was only around $3! Such a great little place to stop and eat!

Also in town, there is a jail museum! This is cool to see because they have artifacts dating back to the early 1900s! They also still have the exact jail cells from when people actually stayed in that jail. On the walls, you could see marks where the prisoners etched in their names or how much time they had left. Jesse James actually visited the jail as well and signed his name in the wall. (see video below)

The tour of the distillery was really great. It’s about 2 hours long and our tour guide was amazing. He took us all around the distillery showing us the whole whiskey making process. Before the tour I knew absolutely nothing about whiskey, and to be honest, I thought the tour would be boring since I’m not a whiskey drinker; but after the tour, I could honestly say that I gained a real appreciation for the process. It wasn’t boring at all! Our tour guide made it fun, and the distillery grounds were absolutely gorgeous. Even if you don’t like whiskey and have no interest in it like I did, its still a beautiful walk through the perfectly kept grounds. I HIGHLY recommend it. There are 2 tours. The first is FREE…yes FREE tour. But remember, its first come first serve, so get there early. The second is their “Tasting Tour”. The tasting tour is the same as the free tour, only at the end they give you a tasting of 3 different Jack Daniels whiskeys. This is the one we did, and is cost us $12 each. I didn’t drink any of the whiskey, but I had to pay since it was a dedicated tasting tour. Steve, my boyfriend did the tasting and he said the $12 was well worth it and he really got to understand the different types of whiskey. 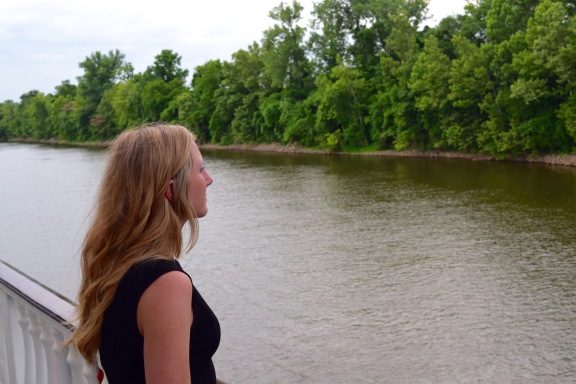 It was our last night in Nashville and we didn’t want to do anything too crazy because we knew we had to be up bright and early to begin the long journey home, so we decided to do the General Jackson Riverboat Cruise!

Now, Steve and I planned this as part of our anniversary gift to each other, so we were expecting a nice romantic dinner for two, but it definitely wasn’t what we expected! The tables were set up to seat 8-10 people so it almost had a wedding feel to it.   We went with two of our friends so we just made the most of it and chatted with the other people at our table. Just a heads up though – if you are looking for a nice romantic dinner, you won’t find it here. Anyways, the boat was absolutely spectacular! The cruise started at Gaylord Opryland and slowly made its way down the Cumberland River right into downtown Nashville. This was perfect for our last night because we got to see a view of the downtown area we hadn’t yet experienced, and it was the perfect way to say goodbye to Nashville! During that time, we had a buffet dinner which was amazing! the food was some of the best we had on the entire trip. After we cruised downtown river, the boat turned around and we headed back to Opryland. On the journey back, we were able to watch a great show with live music! It featured all the biggest country hits and the singers were phenomenal! The show was a LITTLE cheesy since it was a show for all ages, but it was still a ton of fun! The entire cruise from start to finish was about 3 hours. It was great because they gave you time in between dinner and the show to explore the boat deck and have a few drinks. Dessert was served during the show which was a delicious caramel cheesecake. All-in-all, it was a ton of fun and something different that we wouldn’t typically do. I highly recommend the cruise, but just don’t expect to get a private table unless you get a balcony seat (which are actually $20 cheaper). 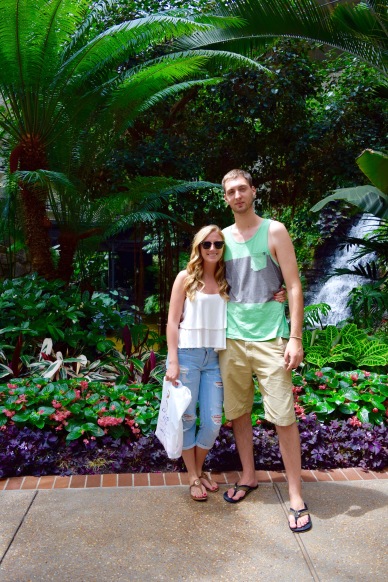 Everyone says that it’s impossible to go to Nashville and NOT see the Grand Ole Opry! This is where country music started and if you have performed at the Grand Ole Opry, you have officially ‘made it’ in the country music world! It’s not located downtown, so you do have to find your own way there. There are definitely bus tours that will bring you there, as well as most taxi drivers will do a flat rate amount of $25.00 from downtown Nashville to the Grand Ole Opry. Also located on the same property is Gaylord Opryland, the biggest hotel/resort in Nashville. It is beautiful and filled with gardens and shops you have to check out! Also located across the street is the Opry Mills Outlet Mall. You should definitely head there as well if you are a shopper! It is filled with the latest trendy stores such as Kate Spade, Michael Kors, Coach and more!

So, if you ever have the chance to go to Nashville…DO IT!

Nashville is an amazing city that’s equal parts relaxing as it is exciting. There is a ton to see, a ton to do, and there are lots of State Parks just on the outskirts if you just want a relaxing week of camping and outdoors. Nashville is a city that has a very small town, friendly, and southern feel. I will definitely return if I get the chance!

If you have been to Nashville, what where your favorite things about it? Comment below or send me a message!

About Keeping Up With Keer (38 Articles)

Welcome to my blog!

Three Lessons I learned from The Art of Social Media