You just woke up after a crazy night out in Nashville, its 40 degrees Celsius (104 Fahrenheit) outside and your extremely hung-over… What would be the ideal thing to do? Sit on your butt all day long eating junk food and recovering, or hopping in the car and doing an all-day hike to the most beautiful waterfall you’ve ever seen? OBVIOUSLY WE CHOSE THE HIKE!!

Yes we were hungover, and yes it was SCORCHING hot outside… but the end result was SO worth it.

We woke up at around 9am and packed a bag filled with water bottles and snacks for the big hike. We hopped in the car and then started the drive towards Sparta, Tennessee where the Burgess Falls State Park is located.  Steve and I had found this park online prior to going to Nashville and knew it was something we were both interested in seeing but we really had no idea what to expect. We knew the falls were going to be beautiful but we were blown away at the beauty of them!

Now, if you are planning on visiting the falls, just a heads up that it is a very strenuous hike. Getting to the actual falls isn’t too bad because most of it is downhill, but it is a very steep climb back up.

There are three points of interest while on the hike. The first one is pretty much right after you get onto the path and it is just a small waterfall. I remember I saw it and thought it looked pretty but then was like ‘IS THIS IT?’ I was definitely in for a surprise when i saw the bigger falls later on in the hike! But this view of the waterfalls was great because we got to take a nice group shot, relax in the shade and drink some water before continuing onto the bigger falls. 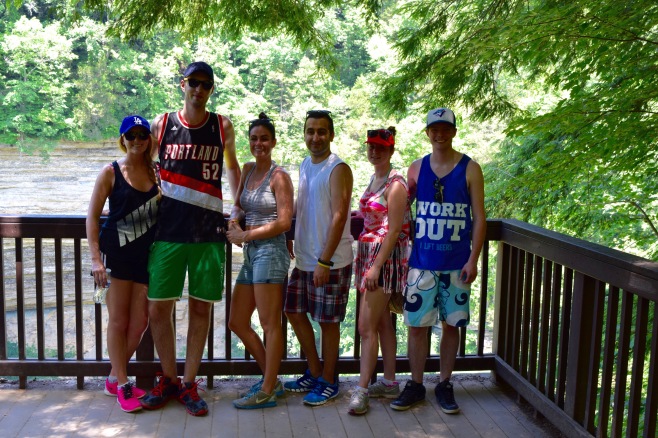 The second point of interest is the top of the big falls. You are able to walk right up to the falls and look down at the beautiful scenery surrounding them. Steve wouldn’t let me get too close though haha, he kept yelling at me to back up because he was afraid I was going to fall off the edge! We spent a lot of time at this point taking pictures and just taking in the scenery. It really was so beautiful. 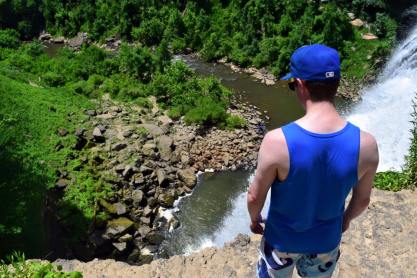 Then we made our way down to the bottom of the falls! The coolest staircase took us down. There were probably a million stairs but there was such a beautiful view of the falls on the way down that it was so worth it.

At the bottom of the Falls, the view is absolutely breathtaking. I have never seen anything like it!

We sat at the bottom for a while on the rocks just taking it all in. I could’ve sat there for hours just listening to the water flow down the falls!

It was pretty busy around the Falls. There were a bunch of people lying on rocks and swimming in the water right below the falls so we decided to go down stream a little bit where we laid out towels out on rocks and swam in the stream! We could still see and hear the falls so it was extremely relaxing!

After a few hours of lying in the sun, it was time for the hike back up… This was the hard part! It took us about 45 minutes to get back to the car. It was extremely hot and we were all so tired! But it was worth it.. And I definitely napped in the car on the drive home! 😊 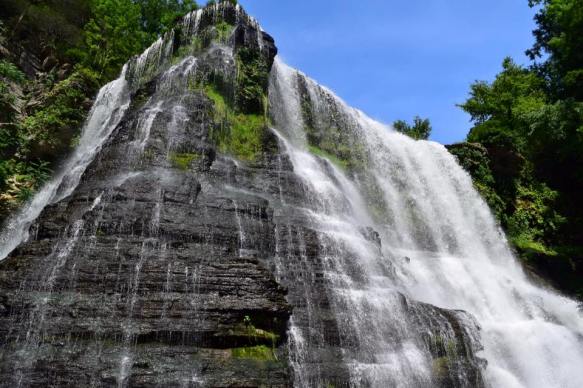 If you are interested in going to the Falls, I suggest waking up early and getting there early in the morning. Because the hike is so strenuous, it would have been much better if we went in the morning when the sun wasn’t beating down on us! I also recommend going through the week, we went on a Wednesday and it was pretty busy, so I can only assume that going on a weekend would be pretty chaotic!

Steve documented the whole trip on his GoPro and put an awesome video together! I’ll link the video below. Please let me know what you think of it in the comments.

About Keeping Up With Keer (38 Articles)

Welcome to my blog!

Three Lessons I learned from The Art of Social Media

Copyright © 2023 Create a free website or blog at WordPress.com.